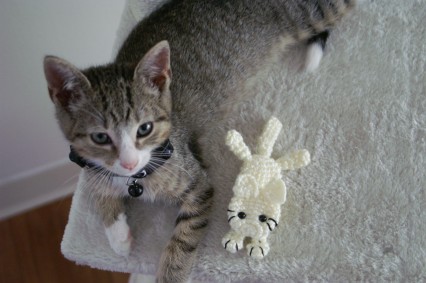 Sora is not pleased with this new companion

Good Morning everyone!
Thought I’d start the day off with a blog post to share with everyone: this cute kitty clip. Last week when I was wondering through Pinterest, I saw a picture of this clip in someone’s hair, and I was devastated when the picture didn’t lead me to the original source. After all my hunting, I was giddy to be led to Krawka’s wonderful blog. The kitty clip was so adorable, how could I not make one for myself? 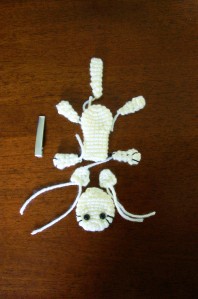 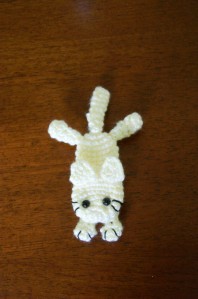 (mine’s a little flat because I didn’t stuff it for whatever reason….)

Assemble the pieces together to make your kitty come to life. FInal step, adding the clip to the back. I used hot glue then reinforced it with embroidery thread. 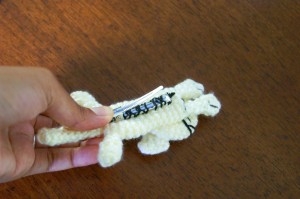 That’s about it! I tried so hard to get a good picture of me wearing it…but sometimes selfies aren’t the best answer, hahaharrr.

If you have spare time, pop by Krawka’s blog to see more of her amazing work, here are a few of my personal favorites:

Finger puppet Super Heros, Hooded Bear Cowl, and Baymax patterns are all offered for free! She even has super villains to go with her super heros, they are all too adorable! Sometimes I wish I had a kid so I had more of an excuse to make stuff like that >.> Or I could just get a head start now hahaha 😀

Last but not least, I want to share River of Strike a Spark’s little bear from my pattern, how kawaii is this?! 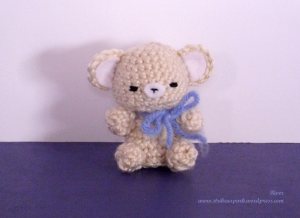 Everyone have a great Tuesday!
– ❤ Millie

Millie On Her World